This is a writeup for a great forensics challenge that I did at UIUCTF 2021 where I found yet another reason to despise Microsoft – something I openly welcome! This challenge involves an unknown file format, navigating MS-DOS, uncovering hints communicated through IRC logs, and finally performing the necessary actions to retrieve a flag by recovering a deleted file.

Oh, well it looks like file is unable to recognize what kind of format it is. Let’s have a look at the hexdump associated with this file and see if there’s anything weird going on with the file format. We can view this file’s hexdump with xxd: 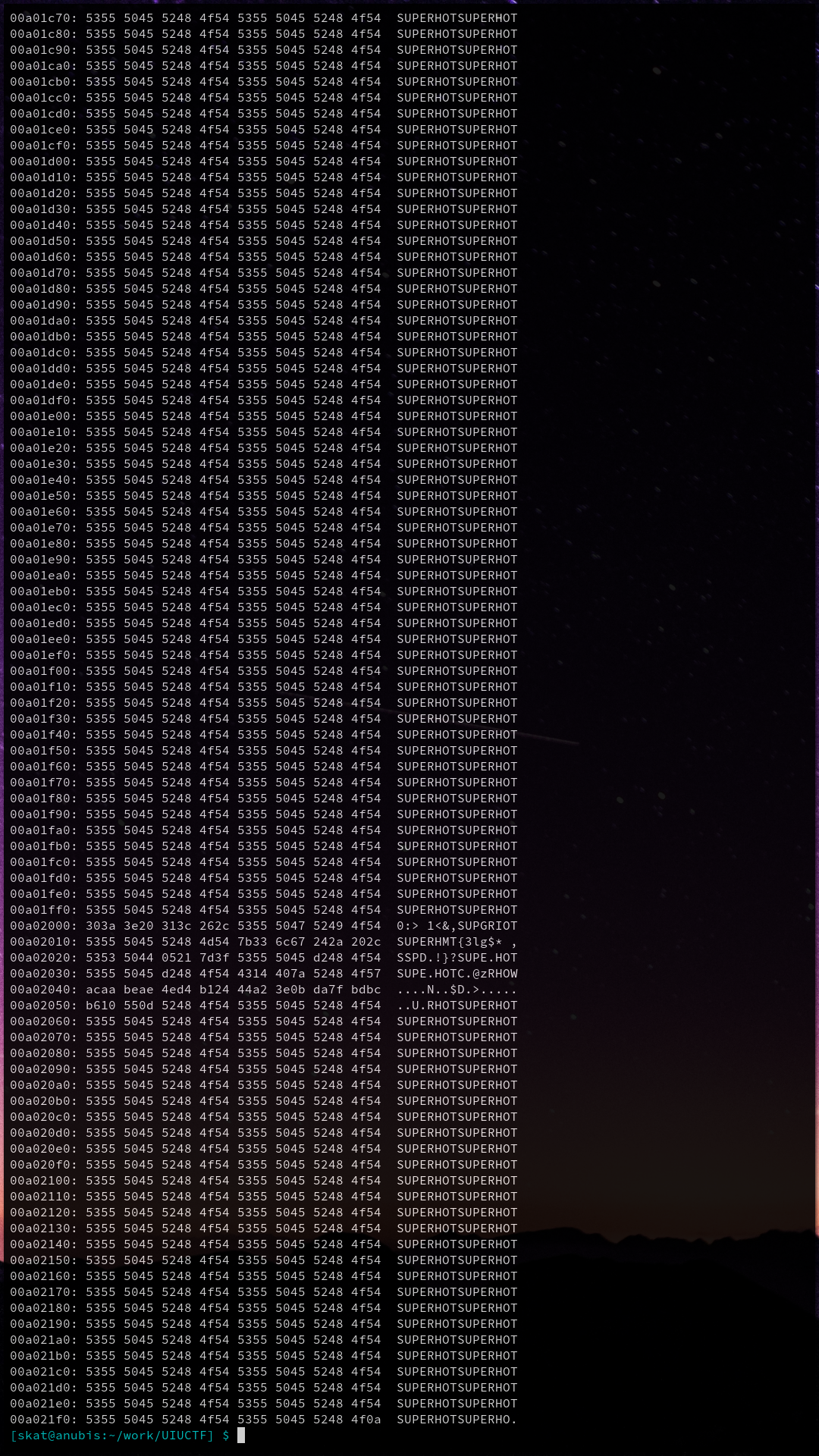 This is the part in the writeup where I make an obligatory SUPERHOT joke: Superhot is the most innovative shooter I’ve played in years!

Stating the obvious here: the file is nearly chock-full of “SUPERHOT.” Confused for a little while, I vaguely recalled how similar this seemed to a challenge that I did with my team a few seasons ago at the National Cyber League involving a database file that had been repeatedly XORed, relying on the idea that most hackers should know that null bytes are extremely common in any file format in order to put 2 and 2 together to realize that the repeating data was the XOR key, and that the original file could be recovered by just XORing it with the key again. My teammates had the same idea circulating:

“SUPERHOT” always being aligned was vital to making the XOR work since “SUPERHOT” XOR “SUPERHOT” would nullify the bytes, and any misalignment could cause catastrophic, snowballing failure down the line. zkldi was able to verify that all “SUPERHOT” started at some offset satisfying i = (0 + 8n) and ended at some offset satisfying i = (7 + 8n), where n begins at 0 and extends for the length of the file. With this, I spun up some quick Python and recovered the original file:

Well that seems disappointing at first glance, but closer inspection of the file header reveals that file’s signature detection has just simply failed – we have, in actuality, recovered some sort of distinguishable format!

The “vbox” string would suggest some kind of virtualization going on with VirtualBox, and the “conectix” stumped me for a little bit until I stumbled on this Wikipedia article. The moment I saw that Microsoft was involved, I grew a few grey hairs. To put simply:

I sent it to the rest of the team so that we could have some more hands on deck: 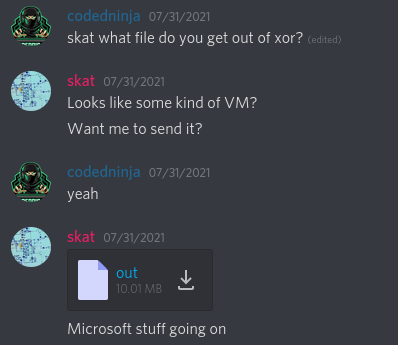 Before loading it up in a virtual machine, I wanted to see if anything could be recovered from it through static analysis. Running strings to recover plaintext strings, as well as carving the file based on signatures with binwalk, I discovered what seemed to be some interesting IRC chat logs:

It looks like someradgamer installed SUPERHOT to their system, which had set up a bunch of directories during setup. They then tried to delete the file shortly before their entire computer got SUPERHOTed against their will, likely leading to the initial premise of the challenge and the source of the file we got in the first place. If we were to recover this file, perhaps we could see what someradgamer saw moments before their computer got SUPERHOTed.

Let’s load this up into VirtualBox and have a look: 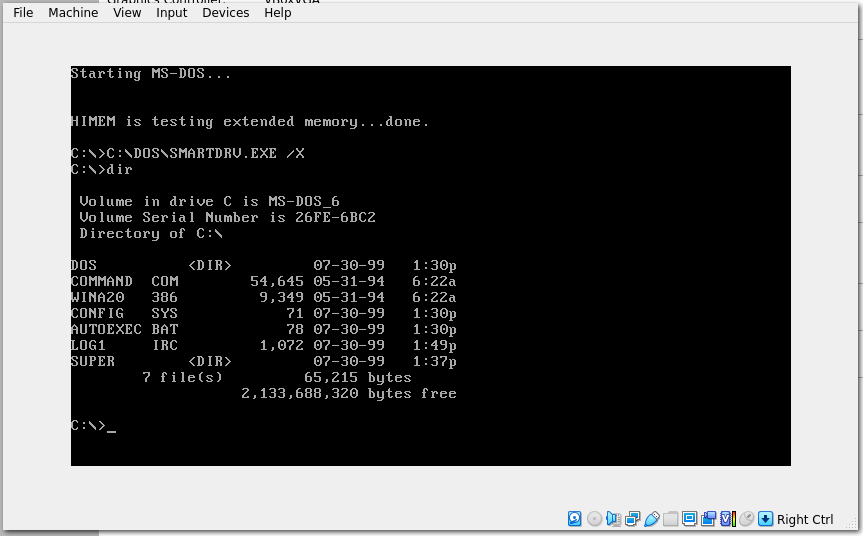 As mentioned in the IRC chat logs, there is a long chain of directories created during setup. We have a linear directory tree that we can then travel down until eventually reaching the bottom and finding an empty directory: 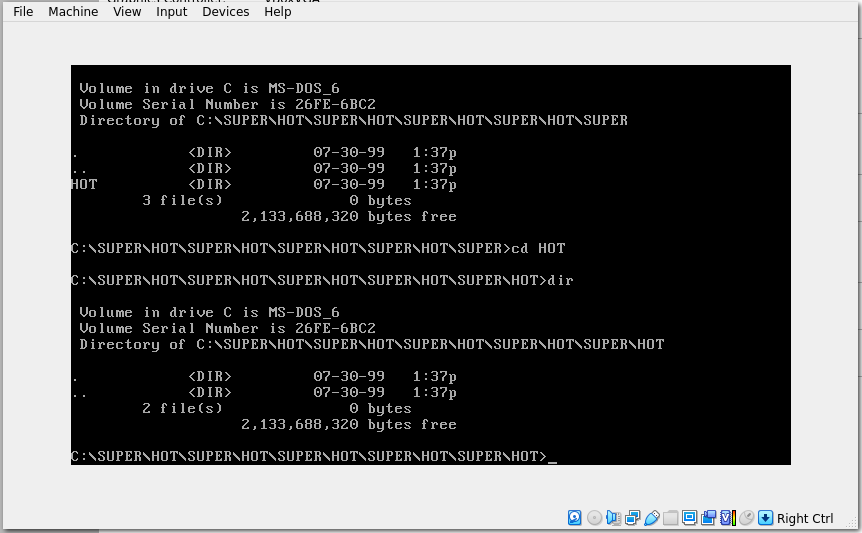 I was stuck here for a while until my memory jumped back to this specific message from the IRC chat logs:

Doing research brings me to an article on MS-DOS’s UNDELETE command. Going off of this hunch, I try to see if there’s anything to undelete at the bottom of this directory tree. Sure enough, we recovered something! 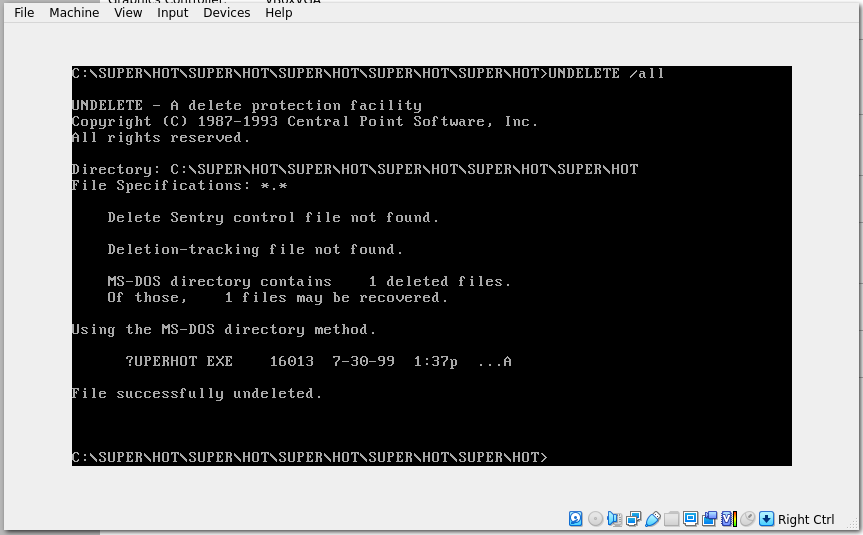 Invoking the recovered file by its name, we start running the game. It says “SUPER” and then prompts us for some input. The correct response is “HOT,” which will then give us the flag: 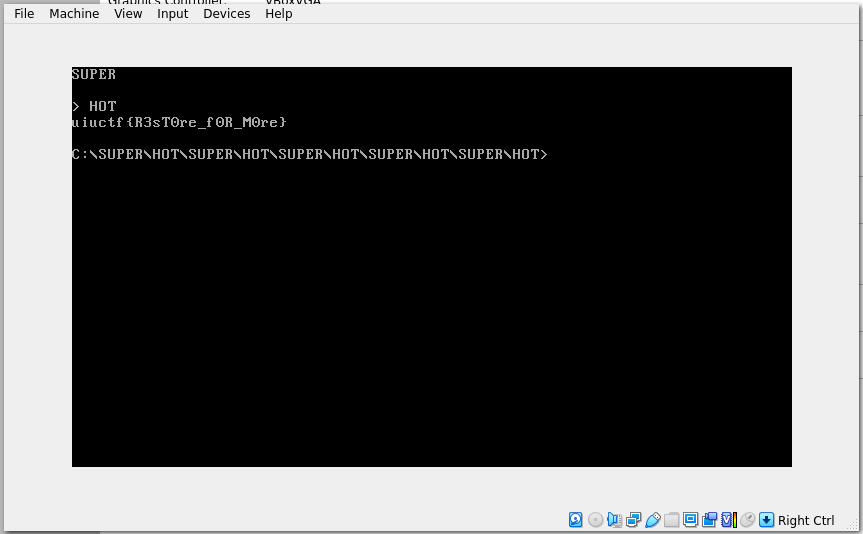 Frankly, the real challenge was MS-DOS; it took me an embarrassingly long amount of time to figure out how to work the completely unintuitive and clunky MS-DOS system, giving me yet another reason to despise Microsoft! – not to imply that I’m short on reasons already.

Overall, this was a pretty great challenge! I recalled on my experience with a similar challenge from the National Cyber League a few seasons ago, worked with my team to successfully confirm our hypothesis, and then spent hours – and I truly mean hours – trying to figure out how to work MS-DOS while also keeping in mind the IRC chat logs uncovered through static analysis. Although the original premise might not be something I would expect to find in the real-life work of a digital forensics professional, the idea of performing static analysis on the resultant file and navigating through a disk image absolutely is. This challenge was pretty fun and most importantly for me, gave me more ammunition to criticize Microsoft with.