This challenge is a hardware flag checker in Verilog. I’m pretty underqualified to make this writeup but I can’t find anyone else who used this approach on Verilog in a CTF context before, so I hope this is useful as a guide for future challenges - and if someone who knows more is able to make corrections, please do.

If we at the provided source, a module logick is defined that seems to take inputs CLK, RESET_N, BYTE, and output “GOOD”. CLK and RESET are normal hardware pins so we can assume BYTE is out actual input. A bunch of wires, which appear to be some kind of local variables, are defined. A set of registers called state are also defined - which seem close enough to be variables too.

Looking at all the bitwise operations, my first thought was to just translate the statements into python equivalents and let z3 do the work. I also (completely wrongly) assumed that BYTE was the flag input of 8 characters, ending up with a script like this:

This did not work at all, and I figured I would actually have to simulate the hardware anyway to solve this. Although I didn’t know what and wasn’t possible with Verilog, I decided to try to find some way to use symbolic analysis to solve for an input.

After quite a bit of Googling, it turns out the right keywords in the hardware world are “verification” and “model checking”. The applicable tools are mainly designed to prove that hardware can and can’t enter failure states, but we can adopt them for our purposes. I went with trying CoreIR Symbolic Analyser (CoSA) because it looked “reasonable” to use.

Getting a bit familiar with CoSA

The first thing we need to do is install CoSA. As mentioned on its README, we can just install it from pip. The README also mentions we need to install a tool called Yosys for Verilog support.

Note that this challenge requires a version of Yosys from Git. I found out after the CTF that there is a bug somewhere in the 9.0 release that will not translate the Verilog correctly.

CoSA itself also requires a recent enough build of Yosys. We can start from a docker image like I did during the CTF (hdlc/yosys) or build Yosys ourself, although it takes quite a while:

The CoSA user manual is a somewhat inpenetrable mass of formal logic and mostly unintelligable to me. Luckily, the examples and documentation section on “Problem Files” give us enough to work with.

At minimum, we need to define the input file and state we want to reach. The documentation details the exact syntax in section 5.3 and here.

Once we have a problem file we can run CoSA --problem problem.txt to see its output.

After defining a minimal problem, here’s what I had:

I set the solver to z3 since I didn’t have other engines installed.

If we run this, we’ll see an output like the following:

At this point I realized the input was one byte per “state”, so my z3 script using an 8 byte input was hopeless anyway.

It looks like we are getting somewhere - the BYTE inputs are valid ASCII, Ical}, and it looks like the end of the flag. However, the simulation ends after 5 steps.

We can use the bmc_length option to make it simulate longer.

Doing this outputs one more byte of the flag, so we can just increase until we’ve simulated “enough”.

At 26 characters, we recover a slightly corrupted version of the flag: }iuctf{1ts0pUr3ly_l0gIcal}. Unfortunately, just replacing the } with a u doesn’t produce the correct flag even though it looks close.

If we paid attention while increasing the simulation length, the model checker is able to find a few variations on the input, one of which has the inner part being {1ts_pUl3ly_l0gIcal}. From this we can figure out the actual flag, uiuctf{1ts_pUr3ly_l0gIcal}.

I did not pay attention, but fortunately one of my teammates is a guess god. 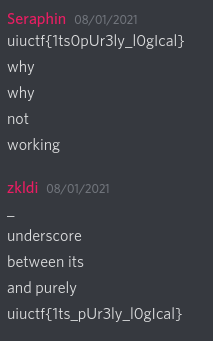 If we inspect the created constraints by CoSA (using the --smt2-log flag) we can see the approach used is actually relatively simple.

A new variable is created for each register/wire at time position and the constraints are connected over time. We could actually do something similar ourselves, which would allow for easier modification of the constraints. That way we could easily lock the first characters to “uiuctf”, for example.

I didn’t try this for this challenge, but the steps to translate the constraints would likely be: